Podcars will come to terms with public transit – unaffordable in emerging economies and heavily subsidized in market economies. Examples from the USA demonstrate the technological inadequacy of current public transit modes.


Capacity
Superficially it would appear that public transit has high capacity.


Light Rail can hold 255 people in each vehicle, which in turn can be linked into a train of two or more cars. Light Rail is smaller and slower than High Capacity Rail, but travels faster and carries more passengers than streetcars or buses. High Capacity Rail is larger and longer, holding up to 1500 passengers (in ‘crush’ conditions).

High Capacity Rail gets power from an electrified rail below the train and requires large stations, more infrastructure and safety separation. Light Rail can run above ground at street level, like streetcars, however it operates in separated lanes, meaning it is not affected by car and truck traffic. Stops are planned to be about 500 metres apart, but closer than High Capacity Rail stops. For more details, please refer to Passenger rail terminology in Wikipedia.

These numbers seem compelling but such High Capacity Trains require long headways, with extensive empty sections of track between trains, equivalent to trying to make a bucket brigade more effective by using larger buckets. In reality a fire hose carries more water by streaming it.

High capacity rail systems require stations too large to fit above ground in dense urban areas or to be affordable in suburban settings, and trains usually stop at all stations en route.

The capacity of the vehicle is not the throughput of the network.

When these high capital costs are amortized over time to be repaid at the farebox, deficiencies are deflected into subsidies. Public transit systems are heavily subsidized throughout the world, with some notable exceptions in east Asia and London. (Curiously, the farebox recovery rate in Silicon Valley is one of the poorest, on the order of 10%, where it costs more to accommodate a public transit commuter than it costs to own and operate a car.)

Aspiring podcar vendors estimate that their costs will be much lower that other forms of public transit, due to a number of factors. For example, this chart from JPods demonstrates, surprisingly, that before even considering the advantages of podcars, due to high labor costs and low ridership, buses are even more expensive than private automobiles. 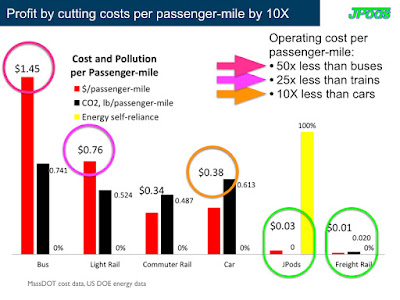 Another important cost metric is safety.


All of this occurs under sovereign immunity and self-regulation by Federal and State Departments of Transportation. By contrast, 0.2 per million injuries occur on amusement park rides, under ASTM-F24 standards.

Future posts will delve into these factors in greater detail.

Posted by Ron Swenson at 8:39 PM No comments:

Advanced internet-based collaboration tools can be used to design podcar networks ... and then these designs can be used to offer a clear vision of the project, to help the public understand the benefits and offer suggestions to improve the designs.

One such tool is Encitra. Similar to Google docs, numerous designers and stakeholders can participate online together in real time to design buildings, infrastructure, urban landscapes and more.

One opportunity to apply this tool and enter a competition is the Urban International Design Contest ("UIDC"). The UIDC facebook page is here: http://www.facebook.com/UIDC2017/.The contest is closed for 2017 but another competition is being planned for 2018.

Here are some videos which demonstrate how this modeling tool works:

Posted by Ron Swenson at 5:01 PM No comments:

Here is a brief overview of the three day Solar Skyways workshop at Tec de Monterrey in Puebla.


Each day will begin with an introduction. In the first session (Observe), teams will be formed and the initial tasks will be accomplished. At the end of the first and second days, each team will give a brief "lightning talk" to the other teams. On the third day, all the teams will present to their advisors, potential sponsors and clients, and then they will conclude. In the vocabulary of international trade, the person with the authority to conclude is the person who makes the deal. 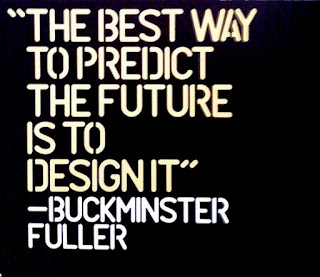 
We now have the tools to create a better world. Let's work together to design and build a new model that works for all of humanity.